Anatomy of a Cheap Samurai Sword

Here we have 2 cheap “samurai swords” which are called “sword-like-objects” (SLO) or “wall-hangers”. These were actually once part of our collection way back when we’re just starting collecting and didn’t know anything about samurai swords. Just like the most of you, we got into collecting samurai swords because we’re a fan of anime and we’re studying Japanese martial arts. We really wanted to own a samurai sword so we searched everywhere: around Metro Manila, Pangasinan, Batangas, and Baguio. Then we found these two. The katana size sword was purchased from Baguio for about PHP 1,200 – 1,500. While the wakizashi size sword was purchased somewhere in Metro Manila for about PHP 800 – 1,000. Now, you don’t have to search around for these type of swords as you would mostly see people walking around carrying such swords selling them.

These swords may look nice to the untrained eye or for the first time collector. Just like what we thought of them back then and we even called these swords “samurai” as what most people say. LOL!

Anyway, let’s get back to these “swords” and let’s learn more about them as to why they are called “sword-like-objects” (SLO) or “wall-hangers”. They are called as such because these are not real swords. They are made of stainless steel and has a “rat-tail tang”. Just what is a rat-tail tang? You’ll see later on as we disassemble them.

Originally, the color of the scabbard of the katana size sword was black and was wrapped in black garter (the same material the handle is wrapped in). Then we just repainted it white. 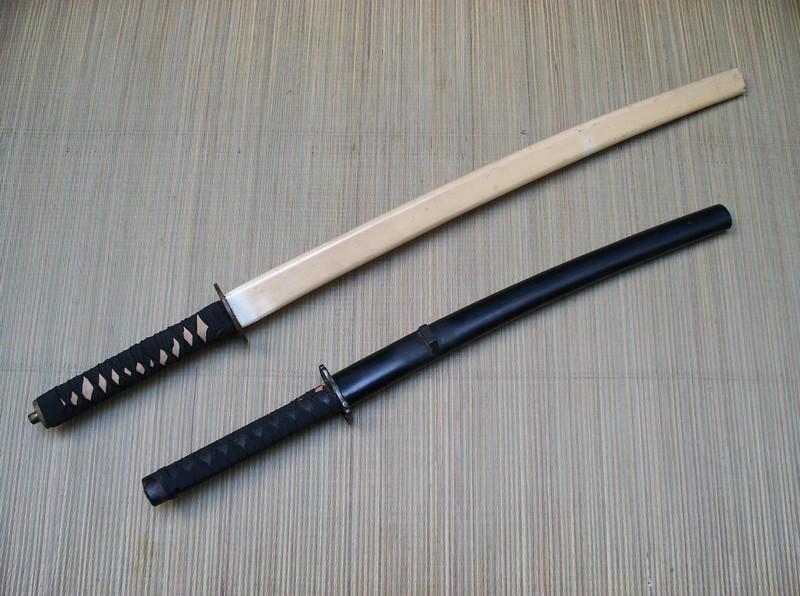 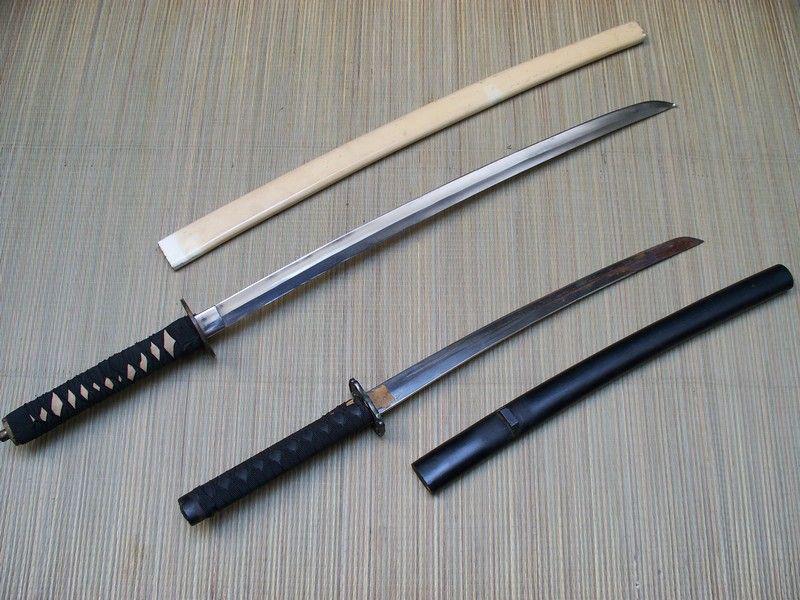 The handle is wrapped in black garter. Originally, it had a red satin cloth underneath, then we just replaced it with a white cloth. 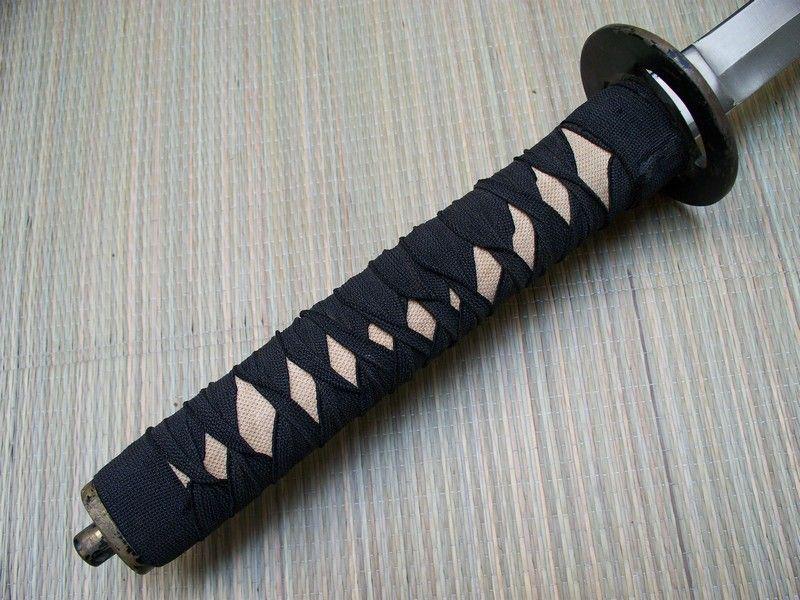 The stainless steel blade. Though you gotta give credit to the hand guard which is made of brass. 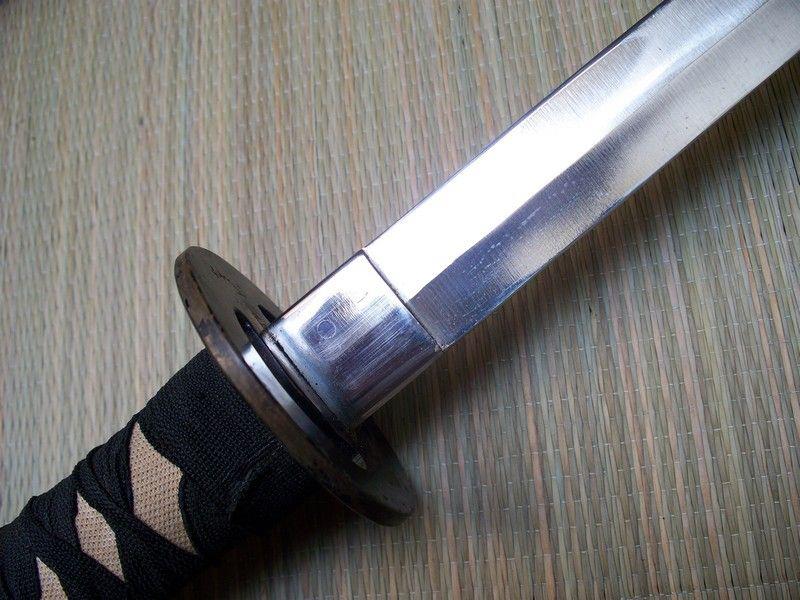 It’s a surprise that the tip bent. We were expecting that it will snap off.

The handle of the wakizashi size sword is wrapped in black nylon fabric. 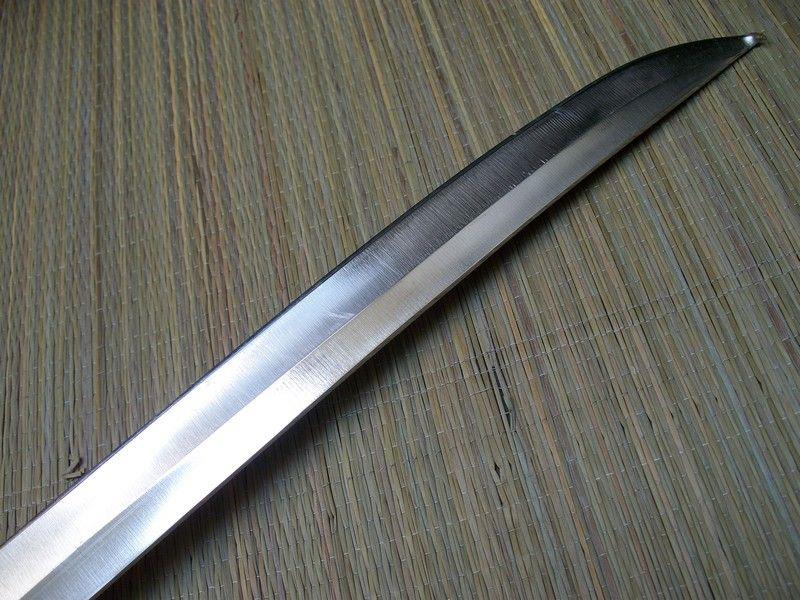 The stainless steel blade. The hand guard is made of cast iron. And then we painted a “habaki”. 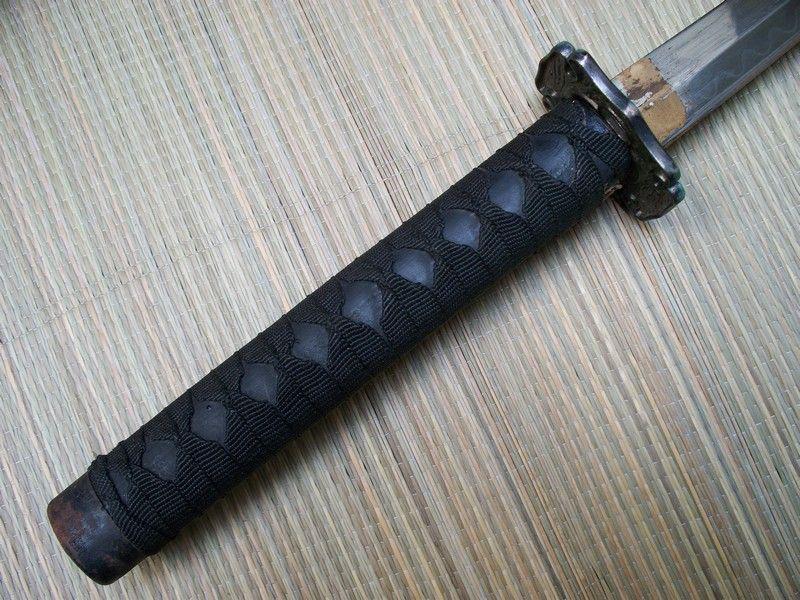 Even though the blade is made of stainless steel, it still rusted as it was left outdoors with the tip stabbed into a pot of soil. 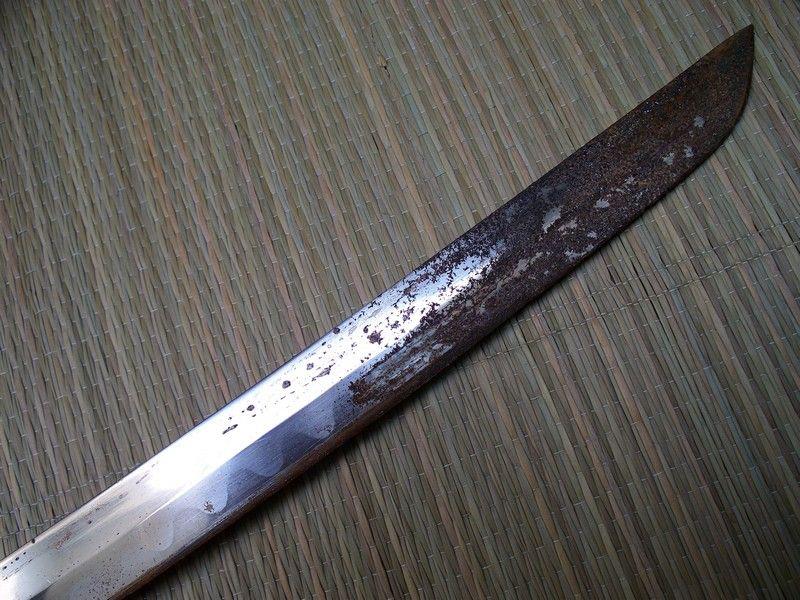 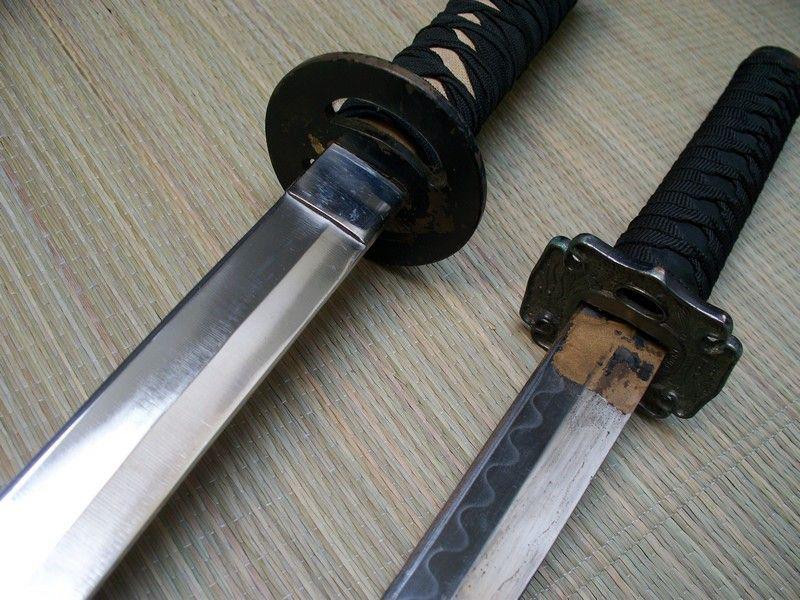 They both have nuts at the end of the handle. 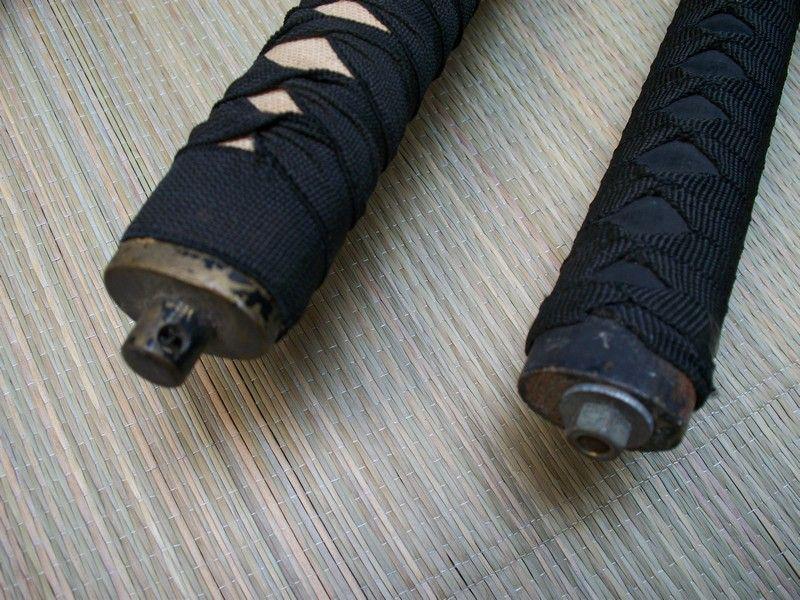 Upon disassembly, you’ll see the “rat-tail tang”. Sometimes, the rat-tail tang is part of the blade, but most often they are welded on to the blade. If you happen to own the same type of sword, we strongly discourage using it as it can snap anytime or the nut loosening when swung and will send the blade flying. 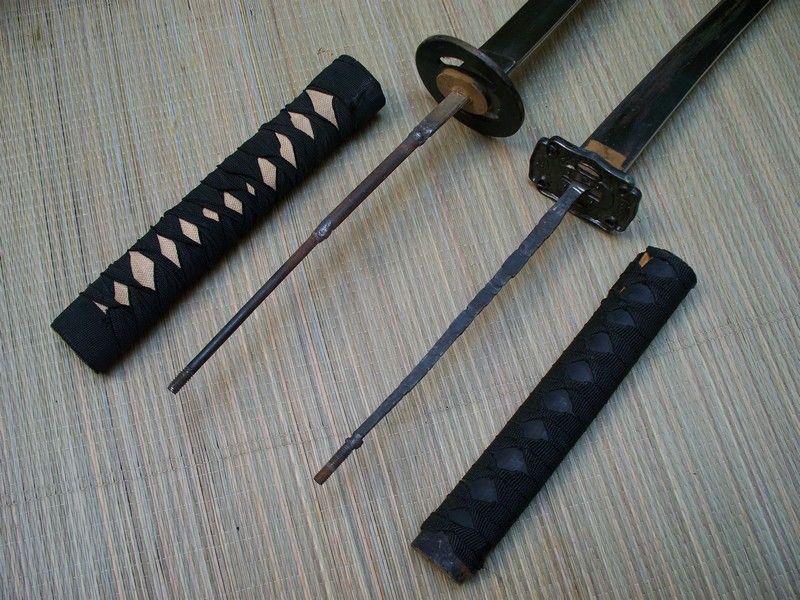 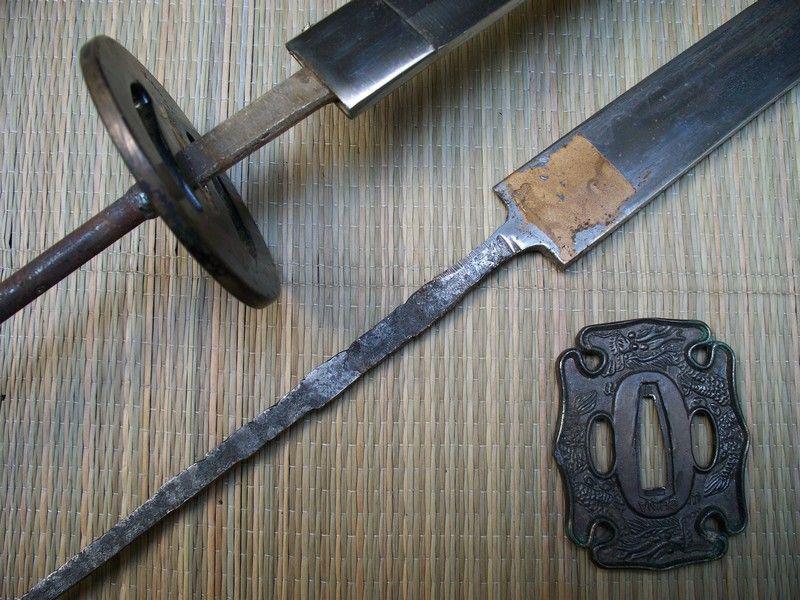 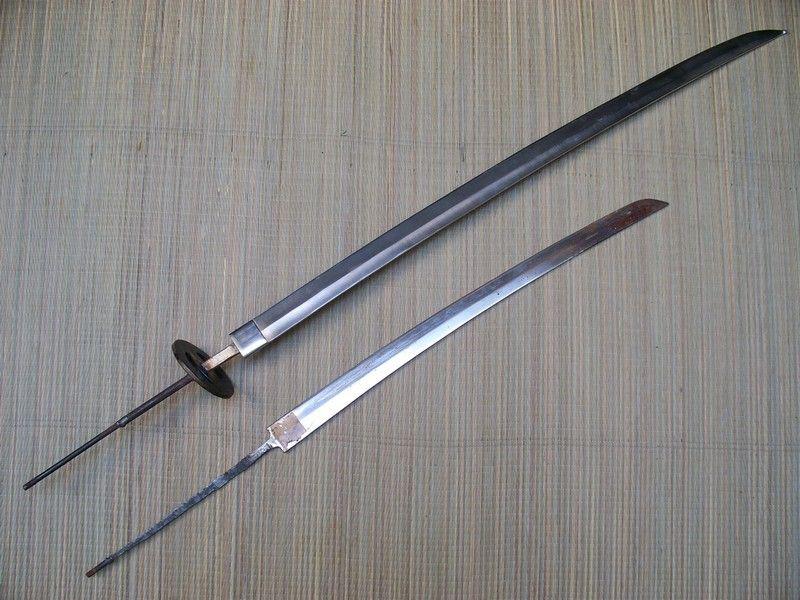 We hope that you have learned something about the quality of these “swords” and won’t suffer the same fate as we did.

2 comments on “Anatomy of a Cheap Samurai Sword”