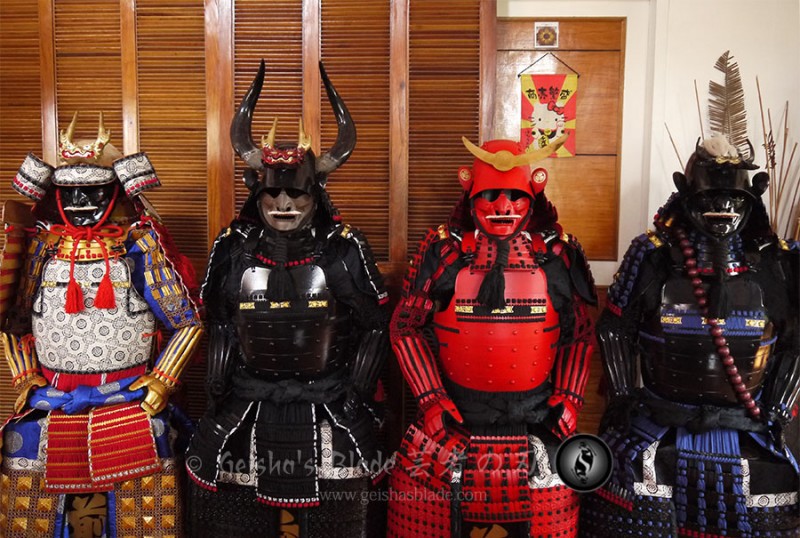 Now that we already have new samurai armors in stock (we’re just finishing taking photos and upload them on our website), we’d like to announce to you that Geisha’s Blade 芸者の刃 is now the authorized dealer of authentic reproduction Japanese armors by Iron Mountain Armory (Fenglinhanjia) in the Philippines.

Iron Mountain Armory has been reproducing samurai armors since 2005. While our armors are hand crafted in China and strictly made by hand in the traditional Japanese manner by highly skilled craftsmen, the armory itself is Japanese owned and managed. China offers a more economical labor force and product availability than Japan. The workers at the Iron Mountain Armory work under the guidance of skilled craftsmen and artisans who have over 100 years of combined experience in armor crafting. Until recently they where only making armor for the Japanese market.

We will be including more samurai armors in our inventory. In the meantime, you can check the website of one of Iron Mountain Armory’s dealers to see the other models available which can be pre-ordered through Geisha’s Blade.

There are many fakes and frauds on the internet claiming to distribute Iron Mountain Armory’s armor at a cheaper price because they are the factory or sell direct. This simply isn’t true, nor is it possible to produce a reasonable quality suit of armor for under $1,000 USD.

If you see armors similar to ours being offered by a company in China or Hong Kong, they are knock offs. There are companies and sellers like “lastarmor”, “zbinstore9″, “liren88f”, ” eye88eye” and others who are using Iron Mountain Armory’s photographs. Don’t be fooled, these are imitation suits. These sellers also do not include the armor box, stand or inner materials / lining. Iron Mountain Armory and Geisha’s Blade 芸者の刃 have NO relationship with any Chinese seller and we are not responsible for any claims, loss, damage and whatever happens by their unauthorized copies. Iron Mountain Armory does NOT sell (retail or wholesale) to anyone except through their authorized dealers.

Please note that our advertised price already includes the shipping cost from the armory, as well as customs tax and import duties. So you don’t have to worry about additional charges when the armor arrives to your doorstep.