Differentially Hardened vs Through Hardened 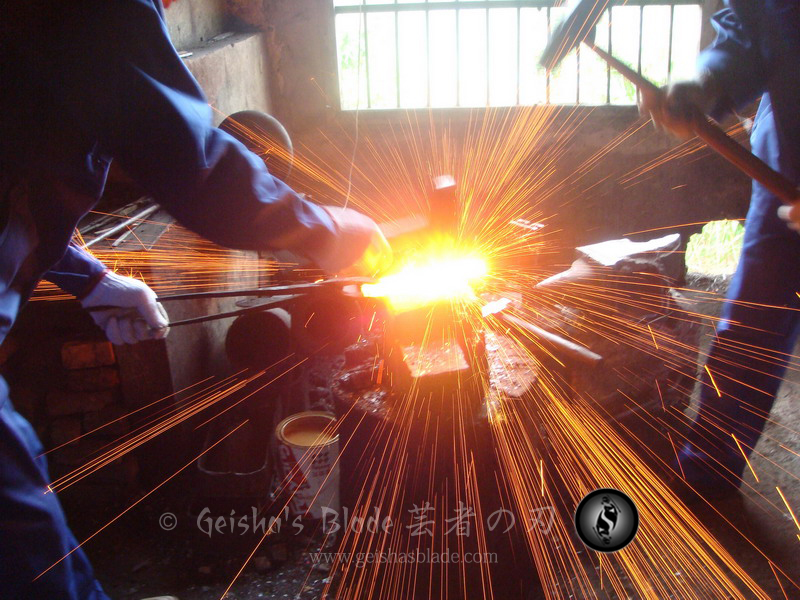 What does it mean when a blade is “differentially hardened” or “through hardened”?

Differential Hardening is the process where the blade is heat treated so that the edge is harder than the spine and body of the blade. The spine and body of the blade are coated with a clay mixture, then heated and quenched. Please note that the term “clay tempered” is a misnomer. Tempering doesn’t use clay, it’s the hardening process that does. Tempering is a heat treatment process that softens the steel after it’s been hardened to prevent it from being too brittle.

Going back, the thick clay coating on the spine and body acts like an insulator and causes the coated portion of the blade to cool more slowly than the edge (the slower the cooling, the softer the steel). This produces an edge hard enough to retain its sharpness, and having a softer, more flexible body that won’t break when it is used. The use of clay is also responsible for producing a real hamon on the blade (though it’s possible to create a real hamon on a blade without using clay, but that depends on the skill of the smith). 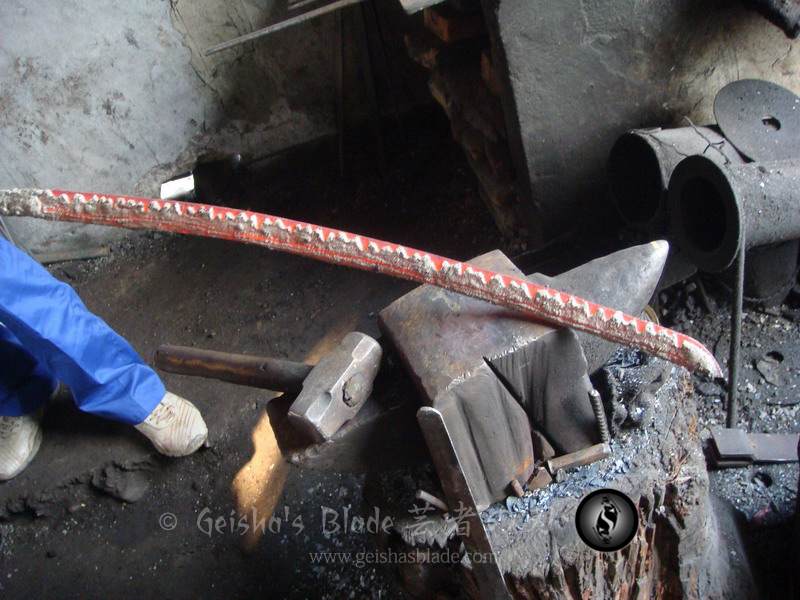 Through Hardening is a process where the blade is heat treated and quenched so that a consistent hardness exists all throughout the blade. No real hamon is produced so a fake one is applied.

Which is tougher, a Differentially Hardened (DH) blade or a Through Hardened (TH) blade? This is actually a controversial topic, but we’re going to lay out the facts and you decide which is best for you. The information below is what other sellers don’t know or simply won’t tell you.

Since a DH blade has a harder edge and softer body, its hardness is not consistent all throughout the blade. It loses it’s “springy” characteristics when it’s DH. This means that it has a greater tendency to take a set if the cut is poorly aligned or the blade is overstressed. So when the blade bends or twists, it will remain bent/twisted. It’s still flexible enough to resist bending under normal use. There are a few very skilled smiths that are able to make a DH blade and retains its springiness, but they are mostly custom smiths and their swords costs thousands of US$. 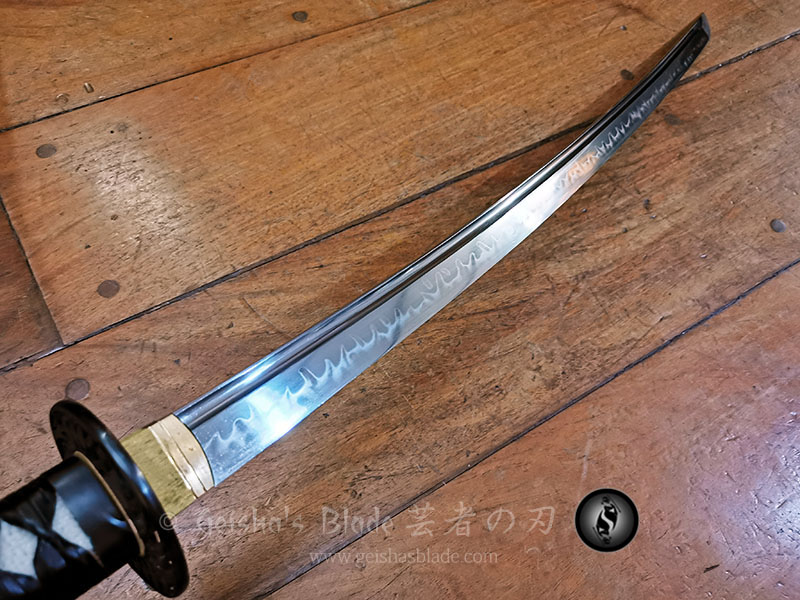 Watch the video below. This is a cutting competition in Japan and the swords they use are traditionally forged and the blades are made of tamahagane.

Notice the sword straightener in the background sitting on a platform covered in blue cloth? After cutting, the performers would approach him to have their blades cleaned and check for bends. You can see him straightening a blade on 1:44. This is how DH blades are, they are designed to bend rather than to snap or break.

Another downside of a DH blade is that it is prone to chipping (or cracking) at the edge when it hits a very hard target or abused. A harder edge is more brittle.

Now for the TH blade, as mentioned above, a TH blade has a consistent hardness all throughout its length. With good heat treatment, the blade can have a spring steel characteristic. So even if you make a bad cut, the blade will remain straight. Please note that not all TH blades can be springy, it still depends on the skill of the smith and type of steel used. Watch the video below of one of our swords with our 2nd Gen 1045 steel blade.

With TH blades, specifically our 2nd Gen 1045 and 1060 swords, they’re capable of flexing up to 45 degrees and still go back straight. It’s also resistant to edge chipping. The downside of a TH blade is that it will not retain its sharpness longer compared to a DH blade, and it only has a fake hamon. 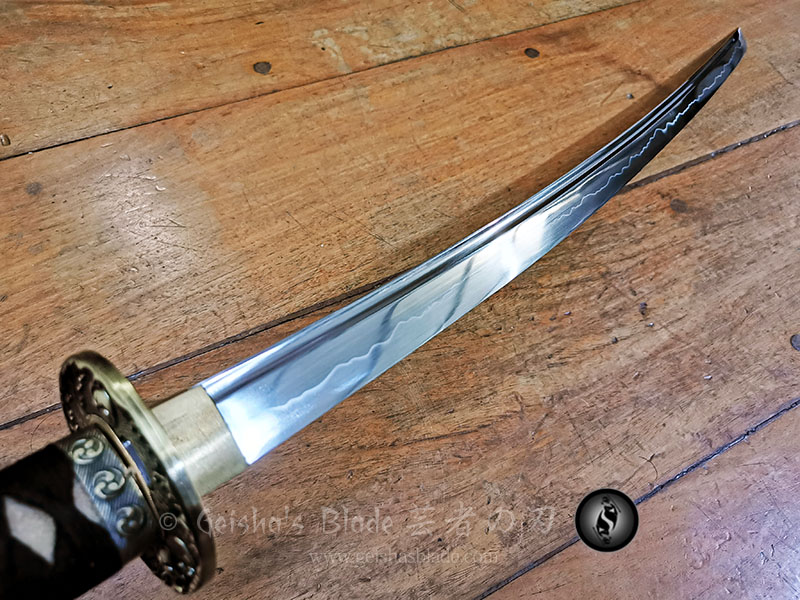 T10 or 1095 steel are usually DH because they produce beautiful hamon patterns. We can also DH a 1045 or 1060 steel, but it would be pointless from a utilitarian point and an expensive feat to DH a lower carbon steel than a higher carbon steel. We also take advantage of the carbon content of 1045 and 1060 because of their spring steel characteristics. It would also be waste to TH a more expensive higher carbon steel that could have produced a more pronounced and beautiful hamon, if it were DH.

Personally, we prefer cutting with our TH 2nd Gen 1045 and 1060 swords, it’s to compensate for our lousy cutting technique. 😅 We have to be honest, we’re not very skilled. We’re just amateurs and we don’t have formal training in tameshigiri. We could say we’re “backyard cutters”, though we’re confident enough to lend our TH cutting swords to anybody without worrying they will damage or bend it. We’ve cut dry and hard bamboo with our TH 2nd Gen 1045 and 1060 swords and they never got bent or damaged. We’ve also cut with DH blades from different makers as well as our own. Unfortunately, due to our poor cutting skills, we’ve bent them. Though we’re able to straighten them again.

To summarize, in our personal opinion:

But then again, we’ve cut with our TH 2nd Gen 1045 and 1060 swords many times against dry and hard bamboo and they’re still very sharp. 😉