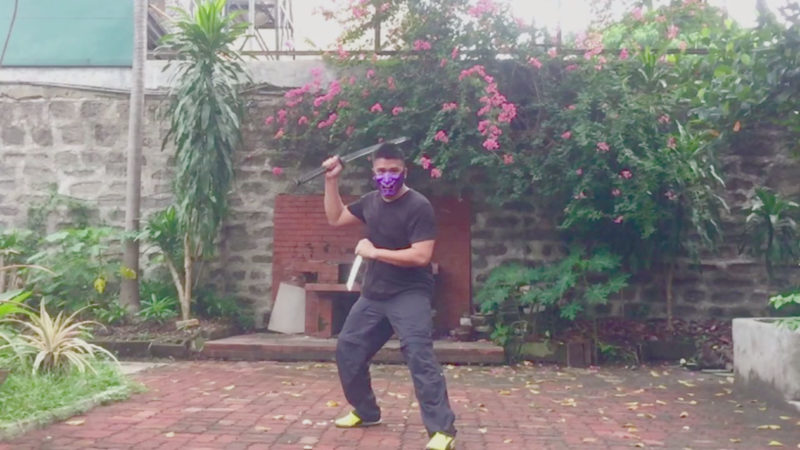 We sent one of our friends and customer, Jason De Leon, our Shinobigatana to do a cutting review. It’s similar to our Aoshi Shinomori’s Double Kodachi, except the blade at the end of the saya is shorter. For complete specs, please go here: https://www.geishasblade.com/shop/ninja-sword/shinobigatana/

We chose Jason for this cutting review due to his background in Filipino Martial Arts, to fully utilize the usage of the blades.

He used a variety of targets for this review: fruits, chicken, fish, and pork meat, water bottles. Before he did his review, we used the Shinobigatana against dry bamboo during our little cutting party last October 28, 2019. 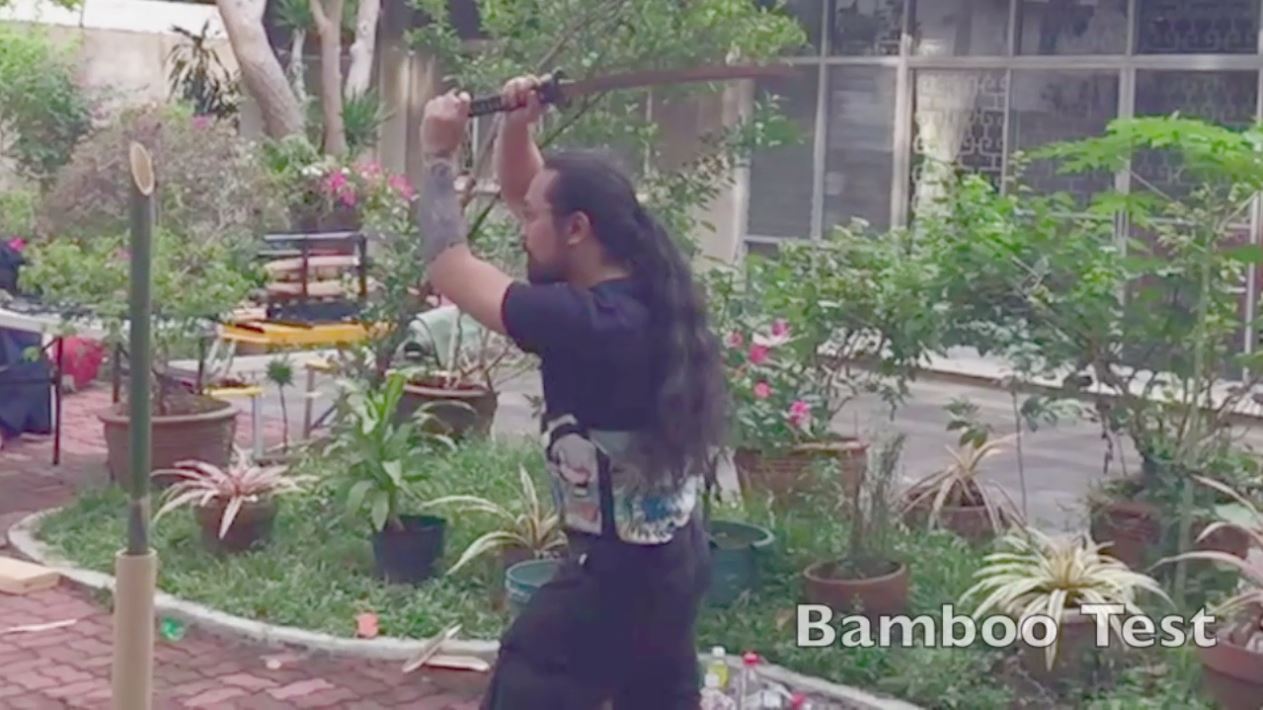 Jason already has our Double Kodachi and Musashi Iaito (sharpened version) and here’s what he said after cutting with the Shinobigatana:

“Ninjas. Everybody wanted to be ninjas at least at one point in their lives. I’ve always been attracted to the Japanese Martial Culture. Most focus on Samurai but ninjas were always portrayed way cooler may it be in movies, comics, or video games.

Picking up Geisha’s Blade Shinobigatana brings you one step closer to realizing your childhood fantasies. The initial feel of that black lacquered saya on your hand feels so sleek and elegant yet the weight makes you aware there is power contained inside. Drawing the ko-katana with a blade length of 16.75 inches may seem disappointing at first since most will expect a longer sword with the overall look considered. The shorter blade is noticeably quicker to draw than regular katanas and with battles fought using these weapons, mere seconds make the difference in the outcome. The Tanto can easily be drawn from the other end yet tight enough that it won’t fall out on it’s own. The 3.6 inch tsuka is just right on the hand. No more, no less. Efficient. The 8 inch blade is a great companion to the main sword and it can definitely add another 8 inch damage to any opponent.

I own a Geisha’s Blade Aoishi Shinomori Double Kodachi which also features a main blade and another hidden blade at the end of the saya. I can’t help but compare the two. The main kodachi’s blade at 17.5 inches is a whole inch longer than Shinobigatana and as mentioned earlier, mere seconds matter. The second kodachi is equally long also at 17.5 inches. Wielding the Double Kodachi feels balanced and my Filipino Martial Arts background comes into play, however, the length and weight distribution in the Shinobigatana enables me to do quicker switches between the weapons without the risk of hurting myself due to the length of the blades. I was surprised how I could easily maneuver and switch from slashing to stabbing testing it on water bottles, bamboo, fruits, and meat. I was pleased that the design went for a curved blade instead of the Hollywood style straight blade. Curved katana handles well and slashes smoother than a straight blade.

Geisha’s Blade Shinobigatana gives me great joy to look at and appreciate but an even greater joy to wield. This piece of art is both beautiful and functional.”

There’s no edge damage after cutting dry bamboo and all those other targets. Just some scratches (which is normal and inevitable) from cutting hard targets. It was also raining at the time Jason did his cutting review, so there were some rust spots from the acid rain. The stains can be easily removed with metal polish and a piece of rag. 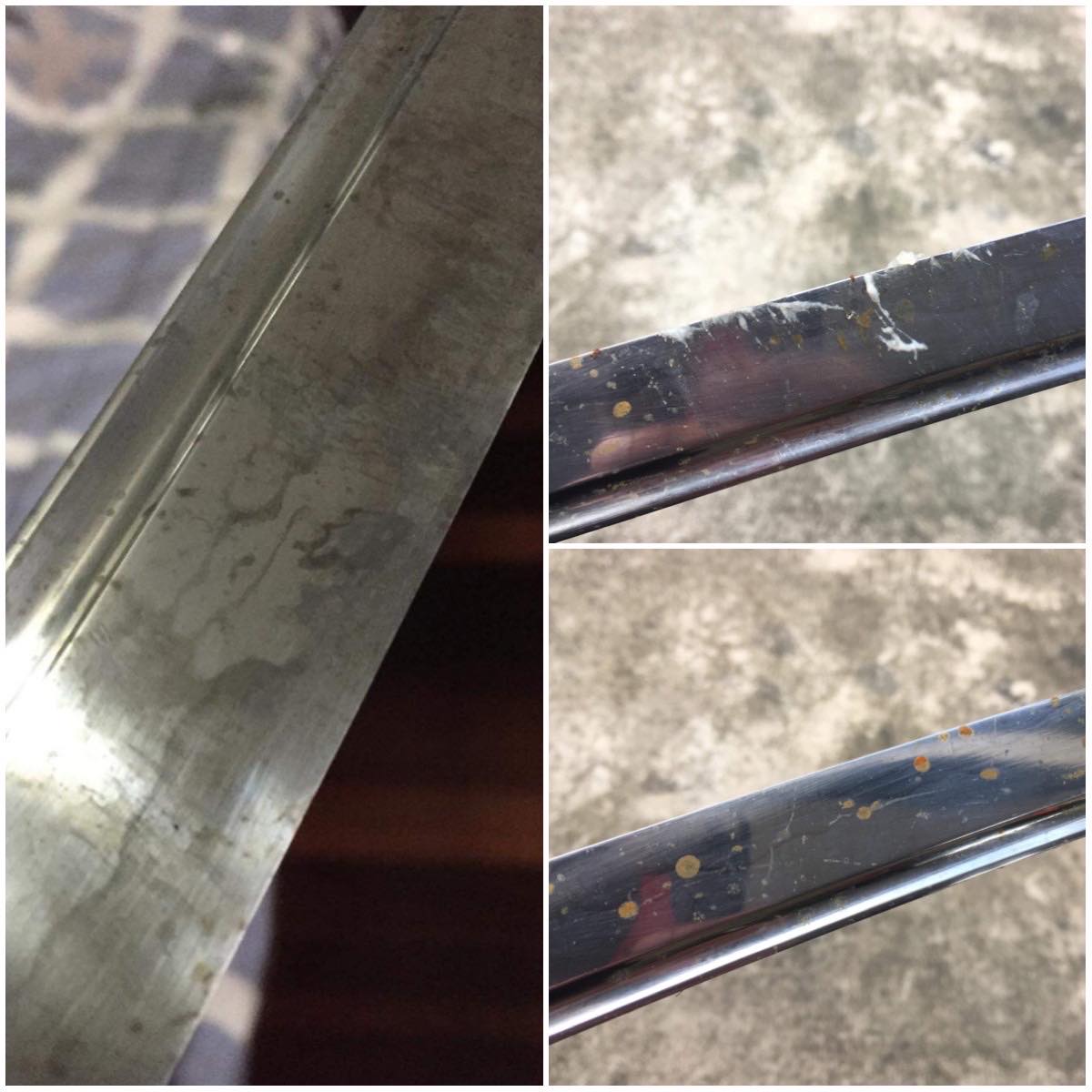 To place your order for the Shinobigatana, please go here.

(It’s currently sold out, but new stocks will arrive hopefully before the end of 2019. Just follow our Facebook page for announcements)