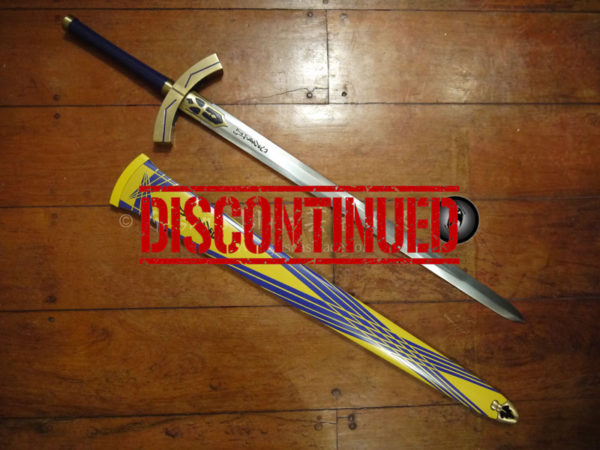 From the popular Japanese eroge visual novel game that’s been adapted into manga and anime, Fate/stay night, we present to you Saber’s Excalibur & Avalon.

Excalibur: Sword of Promised Victory, is the strongest and most majestic holy sword that symbolizes King Arthur and can be called the physical actualization of her ideals. It is her greatest and most powerful Noble Phantasm, which is a divine construction, the pinnacle of holy swords, forged by the planet as the crystallization of the wishes of mankind stored and tempered within the planet.

Avalon: The Everdistant Utopia, is the hallowed scabbard of Excalibur, the embodiment of the utopia King Arthur seeks, originally stolen from her shortly before the Battle of Camlann due to the machinations of Morgan le Fay. It is a luxurious piece of equipment made of gold and decorated with blue enamel that seems more like a treasure to show dignity and nobility like a crown or staff than a weapon. No one knows what kind of a divine mystery it is made from, but it was created by fairies along with Excalibur, an inscription written in Fairy Letters engraved on its center to show that it is not the work of man.