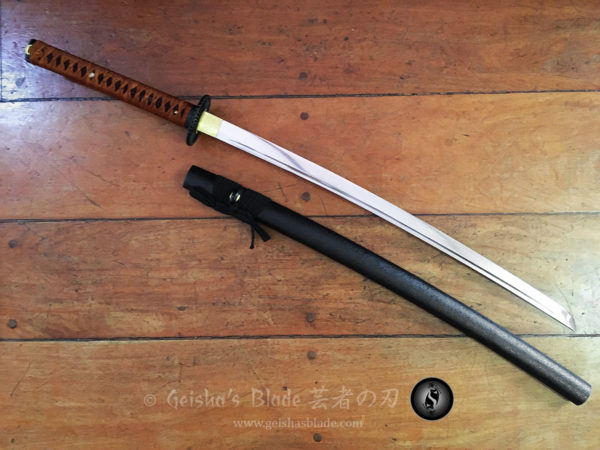 Kiku, or the chrysanthemum, originated from China and was later introduced to Japan during the Heian Period. The tsuba of our Kiku Iaito Katana is the sukashi (open work) of a chrysanthemum.

Kiku gained popularity among members of the Imperial Family and evolved to be the symbol of Japanese aristocracy. It has truly become a crucial component of Japanese culture since then; Japan has given Kiku new meanings and significance. Till this day, the throne of the Emperor of Japan is still called the Chrysanthemum Throne, the highest order, the Chrysanthemum Order, and the national seal, the Chrysanthemum Seal.

Our Iaito Series are non-sharpened swords which are made the same way as our live blades, except the edge is dull. These swords are made specifically for practicing iai or kata with the same feel of a real sword without the risk of cutting or injuring yourself or someone else.  The blade width is the same as our regular swords, about 31-32mm. The blade thickness near the habaki is also the same as our regular swords which is about 7.2mm, but it tapers to 4mm at the tip. Our regular swords tapers to 5.5mm at the tip. Even with a few millimeter difference, there’s a considerable change in weight making our iaito lighter. Since they’re lighter, you’ll be able to perform kata with them faster, and you won’t strain your wrist or arms while training for hours.

(Sharpened version of this sword is also available)