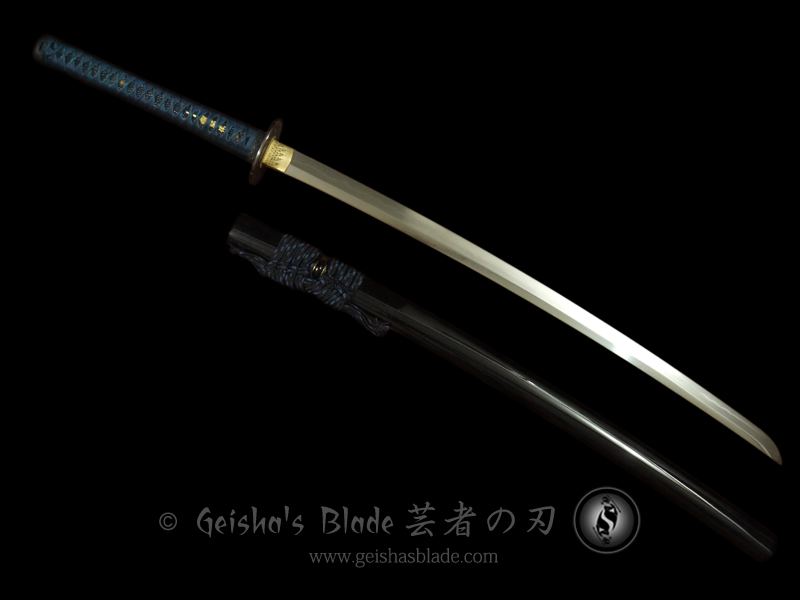 The Mizuchi Katana is named after its tsuba design that depicts a dragon rising from the ocean/water which we believe is a “mizuchi“. On the other side of the tsuba, depicts a thunder cloud and lightning. Mizuchi is a name for a Japanese dragon or legendary serpent-like creature, which is aquatic or somehow related to water. Some perceived it to have been a water deity. The fuchi-kashira depicts water waves which compliments the theme of the tsuba.

Water is a very powerful element. It represents life, rebirth, and pure happiness. It is essential to all life on the planet, but it is also one of the most violent forces known and can represent death and violence. Water seeks it’s own level, and until it finds it, is one of the most irresistable and destructive forces on earth. But once it finds its level, water is peaceful, calming and life-giving.

The shape of the blade is shobu-zukuri. It’s the same as shinogi-zukuri (common blade shape of our katana), except it doesn’t have a yokote (vertical line at the tip). The habaki on this sword features a “neko-gaki” or cat scratch pattern (also called falling rain) which is uncommon to see on modern production swords, but usually seen on nihonto with high quality koshirae (sword fittings).