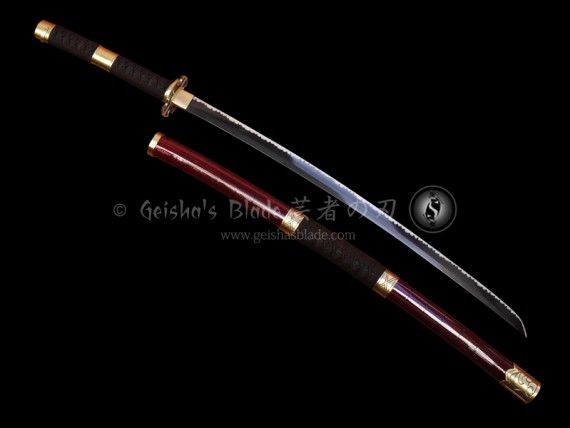 Geisha’s Blade 芸者の刃 hand forged and fully sharpened version of the Sandai Kitetsu Katana, which is one of the swords of Roronoa Zoro, a character from the popular anime/manga: One Piece. This is one of the Wazamono grade swords, a “Sharp Sword”. Like all of its predecessor Kitetsu swords in the One Piece world, this one is said to be cursed and will supposedly bring a horrible death to all of its owners.

Sandai Kitetsu has a sharp edge, making it easier to use for cutting. When it was used by Zoro to test his luck against its curse, its previous owner tried to warn Zoro it would cut off his arm. When the blade passed by without harming Zoro, it cut deep into the floor point first, leaving only one fourth of the blade sticking out of the floor. However, Zoro has commented that the sword appears to have a mind of its own, mentioning that it seemed bloodthirsty, making it a “problem child”. It can also be noted that Zoro can “feel” this sword’s presence without even seeing it. After acquiring it, Zoro uses this sword as one of his three for his Santoryu.