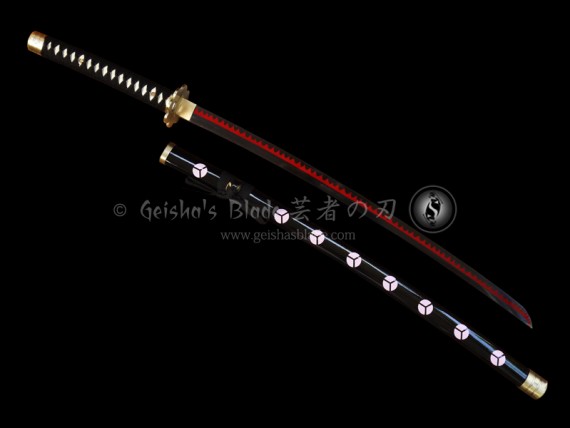 Geisha’s Blade 芸者の刃 hand forged and fully sharpened version of the Shusui Katana, which is one of the swords of Roronoa Zoro, a character from the popular anime/manga: One Piece. This is one of the 21 O-Wazamono grade swords in the One Piece world. It was once wielded by the samurai Ryuma, who appeared as a zombie on Thriller Bark, who had been given the shadow of Brook. After his defeat, Ryuma bequeathed the sword to Roronoa Zoro, and said he was satisfied with Zoro as the sword’s master. The sword then replaced Zoro’s Yubashiri which was destroyed at Enies Lobby.

Shusui is designed to tremendously increase the damage potential and destructive power of the user. At one point, Zoro commented that Shusui’s greatest attribute is its hardness. While it is capable of dealing heavy blows and is extremely hard, Shusui has a few major problems of its own. Just as Sandai Kitetsu turned out to be a “problem child”, Zoro describes Shusui as having a “temper” that makes it harder to wield.