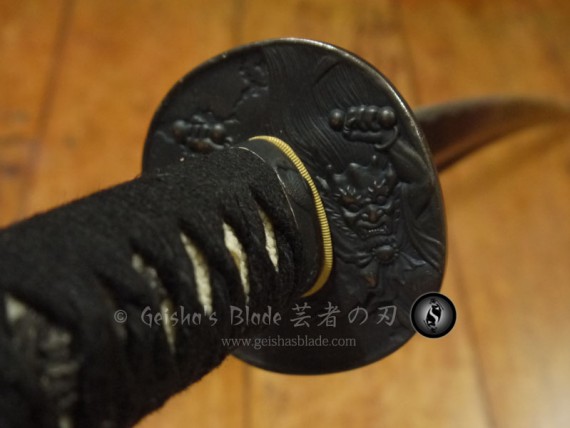 Raijin is a god of lightning, thunder, and storms in the Shinto religion and in Japanese mythology. His name is derived from the Japanese words ‘rai’ (meaning thunder) and ‘shin’ (god or kami). He is typically depicted as a demon-looking spirit beating drums to create thunder.

The design of the tsuba depicts Raijin on the obverse side and lightning on the reverse side. On the kashira, you’ll see Raijin’s companion, the demon Raiju (“thunder animal” or “thunder beast”). Raiju is generally calm and harmless, during thunderstorms, it becomes agitated and leaps about in trees, fields, and even buildings (trees that have been struck by lightning are said to have been scratched by Raiju’s claws).