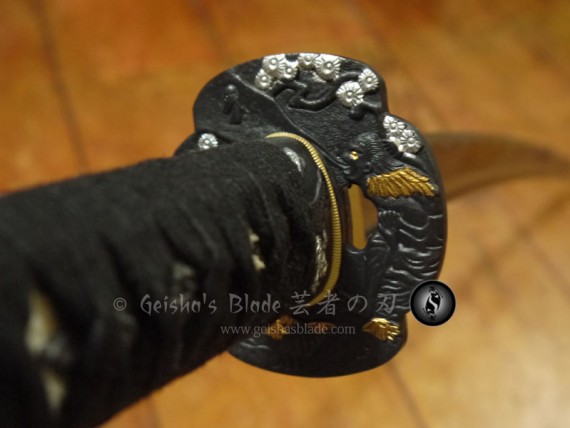 Yokai are strange and supernatural creatures from Japanese folklore. The word is a combination of the characters 妖 (yō) – attractive, bewitching, calamity – and 怪 (kai) – mystery, wonder. Many different English words have been used as translations. Yokai is sometimes translated as monster, demon, spirit, or goblin, but it can encompass all of that and more.

The world of yokai also includes ghosts, gods (kami), transformed humans and animals (bakemono), spirit possession (tsukimono), urban legends, and other strange phenomena. Yokai range eclectically from the malevolent to the mischievous, or occasionally bring good fortune to those who encounter them. Often they possess animal features (such as the Kappa, which is similar to a turtle, or the Tengu which has wings), other times they can appear mostly human, some look like inanimate objects and others have no discernible shape.

The tsuba depicts a yokai under a star magnolia tree with beautiful white flowers, while the kashira features a samurai in armor riding his horse.