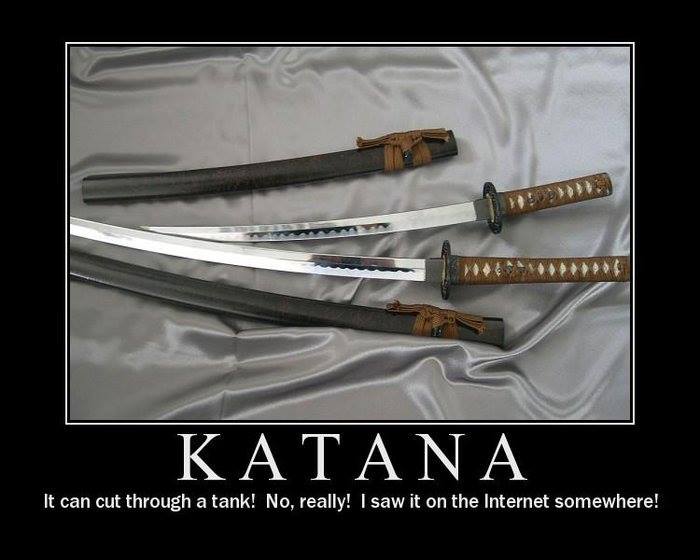 We have received several questions about our swords like: “can your swords be used for real battle without taking damage” or “will the blade remain in good condition if it hits another sword or struck on a steel pipe, nail, cement, or another hard object?”

Whenever we get those questions, we always answer: “any sword regardless of the type of steel it was made from will take damage when hit on to another hard object.”

Even a blade made in Japan that is made from tamahagane is not indestructible. Below are several photos of a nihonto that exhibit “battle scars”.

Here you will see the blade exhibits a cutting mark at the back of the blade.

Here’s a different blade showing a nick on the cutting edge.

You see, even the steel that has been refined for hundreds of years in Japan still takes damage.

The Japanese sword was used as a weapon and was never used to hit hard objects like a steel drum, steel pipe, a rock, etc. The samurai did wore armor, but the enemy tried his best to avoid hitting the armor. Because, once his sword gets a nick on the edge, it will be the end of his life as his sword can break anytime during battle. Nowadays, the Japanese sword is mainly used as a training weapon. For cutting practice which uses non-traditional targets such as water filled bottles and beach mats; tatami mats and fresh green bamboo as traditional targets. It is also used for practicing iaido which consists of sword movements from drawing the blade out of the saya, cutting imaginary opponents, then returning it back to its saya. No sword-to-sword contact or hitting other objects.

On the topic of Japanese swords getting bent during cutting, even nihonto made of tamahagane bends. Check out this video:

Notice the sword straightener in the background sitting on a platform/table covered in blue cloth? After cutting, the performers would approach him to have their blades cleaned and check for bends. You can see him straightening a blade on 1:44.

If you think Japanese swords are indestructible and can cut through a tank, think again ^_^

3 comments on “Are Japanese Swords indestructible?”