What is a daisho?

There are many different opinions on what is and is not a true daisho as worn by the samurai of feudal Japan. Wearing two swords of different lengths was a sign for anyone to see that the owner of the two swords was in fact a samurai, as only samurai were allowed to wear a daisho.

The term “daisho” comes from daitō, meaning long sword, and shōtō, meaning short sword. In feudal Japan a daisho was simply any two swords worn at the same time, one longer than the other, neither the koshirae (sword furniture) or the blades needed to be matching, the wearing of two swords at the same time signified the status of the wearer.

Samurai who could afford the extra expense had matching fittings and koshirae created for their two swords, and when you hear the term “daisho” today this is the most common meaning.

Very well off samurai could go one step further and have a daisho made with matching fittings, koshirae and blades by the same sword smith.

The ultimate daisho would have been matching fittings, koshirae, and blades made at the same time, by the same sword smith. Specifically for the matching koshirae, this is very rare and highly sought after and also extremely expensive.

In modern times, people do buy antique matching fittings and create a daisho using these fittings on two different sword blades that were never actually worn by a samurai as a daisho, these modern creations are not true daisho.

Here is a quote from well known collector, Darcy Brockbank, life member of the Nippon Bijutsu Token Hozon Kyokai (NBTHK) that sums up the true meaning of “daisho”

“There is some discussion that goes on about what exactly makes a daisho. There are several definitions.

To begin the discussion, most times samurai did not get their swords as a pair, unless they were well off and could order a matched pair from a swordsmith. Often times, their lord would present them one sword and they would be expected to get another on their own… if they were lucky they would be provided the long katana and their purchase would be a wakizashi.

Sometimes they would just forego the paired swords if another could not be had, and other times a tsunagi would take the place of one of the two blades.

In some rare cases, swords can be found that were made to exist together by the same hand. In this case, if they are clearly intended as a pair, they may be considered daisho token. This is quite rare and unusual to find. Most times when you look at a “daisho” offered for sale, you will find two separate papers. This often means that the vendor found two swords by the same smith, one a wakizashi and one a katana, and united them and are now selling them as a pair.

This is simply two swords. Even if koshirae are made for them now, they are not a daisho because no samurai wore these swords as a pair, and they have nothing to do with each other outside of the fact that they are made by the same smith. They do enhance each other’s value somewhat, but they lack the rarity and collectability that a true daisho has. It is usually considered that a “true” daisho will increase the value of the pair 100% over their value as individual swords.”

Here are two examples of true daisho, one has blades by different sword smiths but they were paired up into daisho koshirae during the Edo period; the other is a very rare true “daisho token”, two blades made to be a daisho by the same smith and mounted in daisho koshirae. You can see that both blades are judged on the same paper by the NBTHK, this only happens when the sword judges in Japan are certain that the blades were made as one to be used as a daisho.

A daisho koshirae, or two blades mounted in matching fittings. 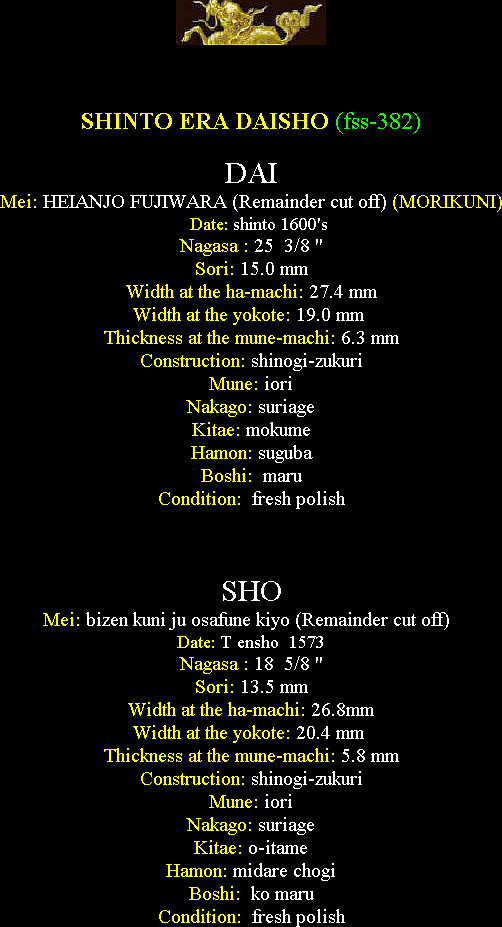 A very rare example of daisho blades and daisho koshirae, there is one judgement paper for both blades, this indicates that the blades were made as a daisho and not just two blades that were paired up and mounted in matching fittings.

“This pair of swords today is a daisho by any definition. They reside in their original antique koshirae, made for this pair of swords, and they were made by the same hand, intended as a pair for a samurai almost two hundred years ago. The NBTHK has certified this by issuing Daisho Token papers when I submitted them to Hozon shinsa in 2003. Both swords are thus recorded on a single paper. It is a very important distinction, because it is one of authenticity and originality. Daisho are rare and wonderful items to have, especially when the swords are by the same maker and the koshirae are present.

The katana is unsigned, as is the wakizashi. This is something that one encounters every now and then in the Shinshinto period. It is theorized that with growing unrest towards the end of the Edo period that some smiths did not sign their work if it was going to the “other side” from where they stood. That is, should the owner be captured or killed, the work could not easily be traced back to them and so by not signing they could avoid potential punishment.

I do not know how much weight this theory holds, I do know that mumei Shinshinto pieces are not uncommon and so there must be some reason behind it.” 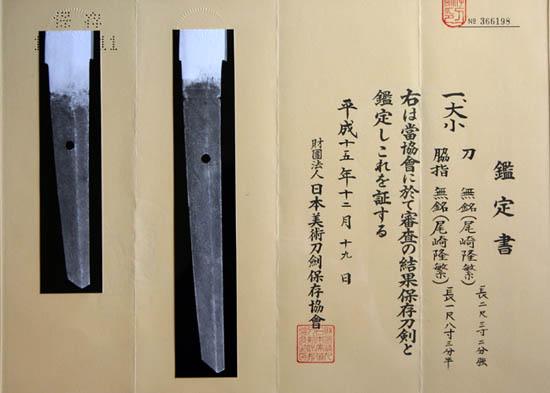